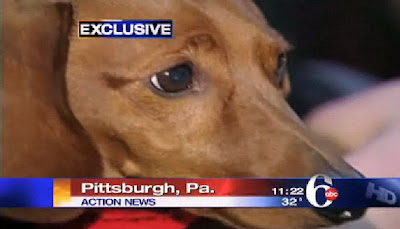 What a fantastic story! Meet the miracle boy with 6 toes on one of his feet, red smooth 'Tootsie,' who is being reunited with his family today in Harrisburg, Pennsylvania, after being lost for 5 years! Tootsie originally hailed from Pleasantville, NJ, and how he ended up as a stray 350 miles away near Pittsburgh is anybody's guess! We're just so happy that he's coming home. Excerpt from 6abc:

Through confirmation via an implanted microchip on the dog, the Animal Rescue League of Western Pennsylvania will reunite owner and pet in Harrisburg, PA on Monday, November 24, 2008.
This incredible discovery was made late last week when Edna Colon, daughter of Elda Arguello, responded to a letter that the family received from the shelter in Pittsburgh.
"We appreciate the Animal Rescue League. If not for them and the microchip, we would never have seen Tootsie again. Because (the Animal Rescue League) understands animal lovers, they did all that they could to find us. We are so thankful to (the organization) and their work to get Tootsie back to our family," said eighteen year old Edna Colon.

I don't like it when people say that dachshund aren't smart dogs. Tootsie proves that they are!