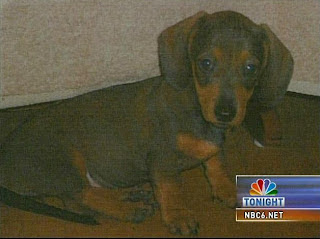 Photo: NBC6.NET
We love happy endings, and there's nothing that can bring a bigger smile to our faces today than knowing that little 5-month-old chocolate and tan 'Samantha' was reunited with her humans on Monday in Miami. She was stolen on January 17th at her home during a burglary, and a week later, a woman tried to sell her at a local pawn shop. The pawn shop owner refused to purchase her. Excerpt from the Miami Herald: Samantha had lost a few pounds since the last time her family had seen her. But the moment they walked into the police station on Monday, they knew it was her.

On Jan. 17, burglars broke into the West Little River home belonging to Benny and JoAnn Biscotti, taking money, electronics -- and Samantha, a 3 ½-month-old dachshund.
''The day she was taken she had more press coverage than Britney Spears,'' JoAnn Biscotti said.
The first lead came a week later, when a woman walked into a Miami-Dade County pawnshop and tried to sell a "cute hot dog."
The pawnshop owner declined the purchase, but the next day, Benny Biscotti walked into the shop with a flier of the lost dog. The shop owner put two and two together, and police arrested Franklyn Castro, 21, charging him with grand theft.
Castro confessed to the crime, police said, but wouldn't say what happened to the dog.
Read all about the happy reunion at the Miami Herald. 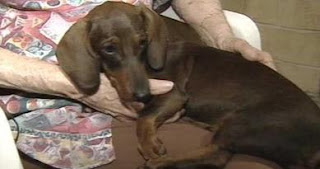