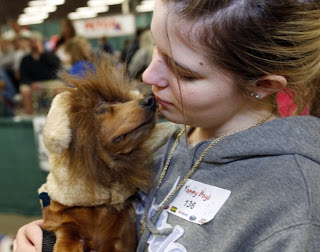 Kisses! Proving once again that dachshunds are taking over the world, here's the latest dachshund news from all over the globe. Woof! Above, Kiley Cragun receives kisses her dachshund, 'Beanz' before they compete in the Best Dressed Dog contest at the Sixth Annual Yappy Days at the Kansas Coliseum in Wichita, Kansas. Beanz was dressed as a lion. Read all about the event at Kansas.com.

In other news, a Brooksville, Kentucky woman was saved by her dachshund who woke her up when her house was on fire and filled with smoke! She had once thought about finding another home for her doxie, but after saving her life, she will be keeping her hero. Read all about it at The Ledger Independent. 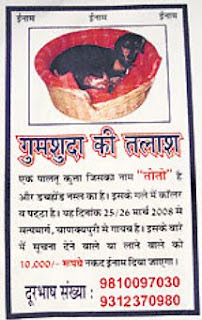 Moving to the other side of the globe, posters like the one above could be seen all over Delhi, India, in search of their top cop's dachshund. A 10,000 rupee reward was offered (about $250 - a lot of money in India) for the return of Police commissioner Yudhbir Singh Dadwal's favourite pet dog, 'Toto.' She was found on Saturday, 4 days after she went missing. There will be minor security changes at the commissioner's house after this incident, said a source. Read all about it at The Times of India. Related: Dachshunds in India 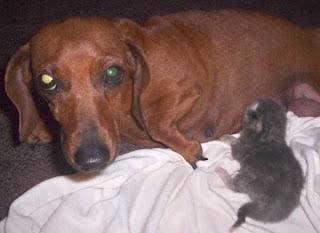 Finally, there's more dachshund interspecies nursing in the news! Let's go back to Kansas and meet 7-year-old red smooth 'Princess,' of Iola, Kansas, and her kitty. Excerpt from the Iola Register: When a LaHarpe girl brought in an orphaned litter of kittens — they’re only a few days old — one of the young felines was not getting enough nourishment from a bottle. The kitten also declined the teat from another female cat who had recently given birth at the Lynes’ rural Moran farm.
Fearing the young cat’s uncertain fate, Lynes — who has raised and sold dogs for more than 20 years — introduced the kitten to Princess, who had given birth to a litter of pups about two months ago. "The last of her pups was sold Wednesday, and she was still ready to nurse," Lynes noted.
Princess quickly bonded with the young kitten, licking the fragile animal clean and allowing the kitten to nurse.
Read all about Princess and the kitty at the Iola Register.