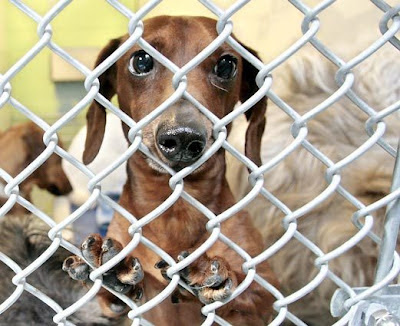 Photo: TOM REESE / THE SEATTLE TIMES
This iconic photo appeared in a page one photo on Monday in the Seattle Times (both in print and on-line) for a story about conditions at local King County's animal shelters. Isn't that another red smooth doxie in the background? Excerpt: Many readers called the newspaper and King County Animal Care and Control — and some went straight to the shelter — to see if they could adopt the brown dog. But it had been adopted last Tuesday, the same day it arrived at the Kent shelter and Seattle Times photographer Tom Reese took its picture.
Even though many people may have been disappointed they missed the chance to adopt the front-page dachshund, Al Dams [Animal Care and Control's acting manager] said he believes interest in the dog has boosted the number of other animals now being adopted.
The previous owner "did the right thing," he said — bringing it in for adoption when the owner found he or she couldn't devote the time required to care for a dog.
Read all about it at the Seattle Times.
Posted by Rowdy and Bette at 7:59 AM