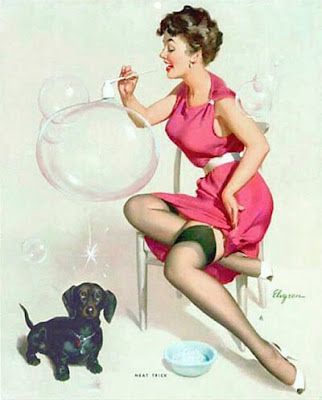 Did someone say Woof?! Gil Elvgren (March 15, 1914-February 29, 1980), born Gilette Elvgren, was an American painter of pin-up girls, advertising and illustration.
Elvgren was one of the most important pin-up and glamour artists of the twentieth century. In addition, he was a classical American illustrator.
His clients ranged from Brown and Bigelow and Coca-Cola to General Electric and Sealy Mattress Company. During the 1940s and 1950s he illustrated stories for a host of magazines, such as The Saturday Evening Post and Good Housekeeping.
Although best known for his pin-ups, his work for Coca-Cola and others depicted typical Americans — ordinary people doing everyday things.
The above image, titled Neat Trick, comes from a 1965 calendar.
Find out more about "the Norman Rockwell of Cheesecake" at the official Elvgren site. 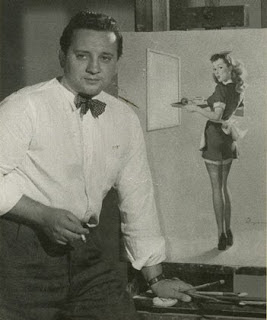 Been enjoying your blog (via Blogged), and especially love the 'Celebrity Dox.'

Thought you might also enjoy this celebrity sighting over at What's Up, Doxie? (Or, A Little Dachshund DailyLove®).

Keep up the great work.