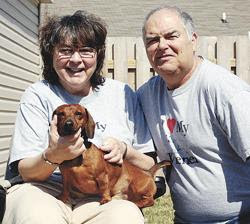 Huh? A cat?! Meet 5-year-old red smooth celebrity 'Bernie Mac' and his humans, Linda and Jim Burns of Columbia, Tennessee. His humans were boarding up the crawl space beneath a storage shed on their property when Bernie darted inside and refused to come out. Excerpt from The Daily Herald: “Bernie can be pretty stubborn, and he was definitely on a mission that day,” Linda Burns said.
Before long, the Burns found out the reason their dog refused to come out from under the shed.
“Bernie evidently had become friends with a black cat, and he knew the cat had made a home under the shed and she was still under there,” Linda Burns said. “He was protecting her. If not for Bernie, the bottom of the shed would have been sealed up with the cat underneath.”
Jim Burns said Bernie’s best friend in their former neighborhood also was a cat.
“Bernie is a smart little guy. On that day, he saved a life, and as far as we’re concerned, Bernie is definitely a hero,” Burns said.
Way to go Bernie! Read all about the chivalrous canine at The Daily Herald. 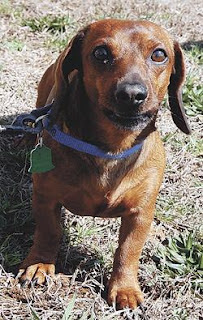