Dachshund Love: Toey and the Plumber 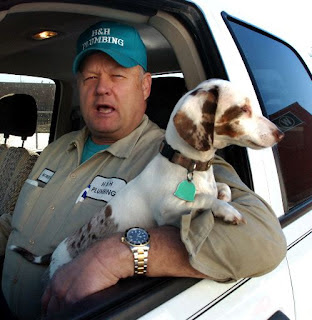 We live to read such heart-warming dachshund stories like this. Meet 3.5-year-old smooth double dapple blind and deaf 'Toey,' and her human Bobby Hollabaugh, a plumber from Amarillo, Texas. Mr. Hollabaugh used to think that dogs belonged in the backyard until he met Toey, who sleeps in the bed between the sheets with him and his wife! Excerpt from amarillo.com: "I can't really explain it," Mr. Hollabaugh said, "but I was totally smitten the first time I saw her."
"It's changed his life," Glenda [Mrs. Hollabaugh] said. "He used to be a grouchy old man, and now the dog has turned him into the biggest baby. He's like a big ol' kid. He loves it like a child. I can't tell you how much he loves that dog."
The two are practically inseparable, together about 22 out of 24 hours a day. At night, she's in his or Glenda's lap. During the day, Toey is with Hollabaugh, either in the truck or with him in his shop on Polk Street. It's been that way since Hollabaugh first saw her.
Read all about Toey and see lots of pics at amarillo.com.
Posted by Rowdy and Bette at 9:38 AM