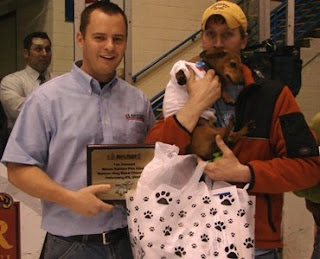 Meet red smooth dachshund 'Snooter' and his humans, as photographed Friday night after Snooter's big win at the first ever Sioux Nation Pet Clinic Weiner Dog Race during a Sioux Falls Stampede Hockey home game in South Dakota. Snooter beat out 19 other long dogs to take home the coveted award. Way to go Snooter! Excerpt from Sioux Falls Stampede: “I’ve been practicing for weeks and it paid off,” said Snooter. “I just tried to stay focused before the race and not get caught up in all the smack talking going on by the other dogs. My owner [Mat Tougas] did a great job getting me in shape and ready for the race,” added Snooter.
While other dogs mingled at the shotgun, Snooter took off, flying across the ice before stopping briefly to look back at his competition before prancing over the finish line. One Eyed Willie and Bailey finished second and third. Read all about the Wiener Ice Races at Sioux Falls Stampede, it's a fun story.

We searched for a video of the big race and couldn't find anything, but enjoy this wiener race on ice video from the Knoxville Ice Bears hockey game on February 2nd, 2008.

I was there, and competed...it was SO much fun!

Can't wait until next year! But before then, we have to get in some training - most of the weenies (mine included) didn't know where to go!

But we still had a blast. Thanks to the Stampede and Sioux Nation Pet Clinic for sponsoring the race!!!!