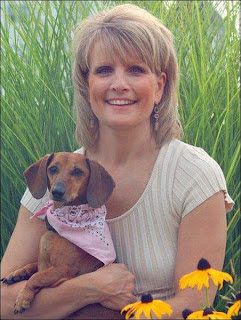 Meet pretty red smooth 'Frankie,' and her human, author Barb Techel (huh?) of Elkhart Lake, Wisconsin. Frankie and Barb were at a book-signing yesterday at The Ostoff Resort in Elkhart. Before the signing, Techel offered a brief lecture, a selected reading, and answered questions. More importantly, Frankie was on hand to model her new satin-quilted heart coat and promote her new book Frankie The Walk 'n Roll Dog. Excerpt from The Sheboygan Press: Frankie, the 8-year-old dachshund, would like everyone to know she is officially "woman's best friend." That woman would be her owner, Barbara Techel. Techel has just written her first children's book, "Frankie: The Walk 'n' Roll Dog," whimsically written from Frankie's perspective — including accounts of her own house training rebellion and accidents.
Nearly two years ago, Frankie — short for Francesca — lost the use of her hind legs to paralysis. Still reeling from the bone cancer death of her chocolate lab, Cassie, less than a year prior, Techel forged through the adversity and became a better person because of it — with the help of her furry companions. "Don't tell her she has wheels," Techel said. "She has no clue." Read all about it at The Sheboygan Press.

Also, the doxie superstore Dachshund Delights, (we highly recommend their Hug-A-Dog Harnesses), has spoken to Barbara Techel and offers a more in-depth look at Techel and Frankie in their awesome monthly newsletter. Don't miss it. 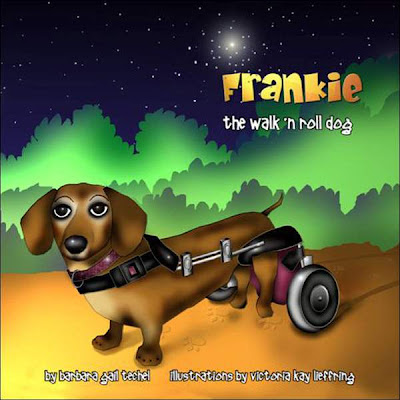 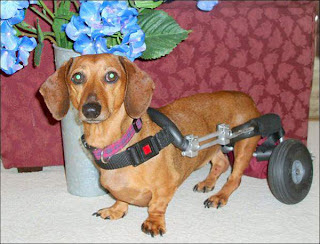 Frankie
Posted by Rowdy and Bette at 7:41 AM

Thanks for letting us meet Frankie!
And thanks for commenting on our blog. We're still learning, but you guys have it down to an art. Come back any time. In the meantime, we're adding you to our blogroll and we'll tell all our buddies about you.