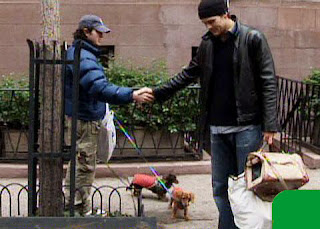 New England Patriots quarterback Tom Brady met some of his fans on Monday in New York: dachshunds 'Tom Brady' and 'Fenway.' Tom, the human, seemed to be a little bewildered by it all. Tom, the dachshund, was probably crushed that he didn't get a little pat on the head from his idol and namesake.
TMZ provided the video, and the Boston Herald provided a recap: The video posted yesterday shows the newly crowned AP Offensive Player of the Year exiting galpal Gisele Bundchen’s pad in the Apple Monday morning carrying a white canvas bag and pink dog carrier containing Vida, Gi’s Yorkie.
Let’s break down the tape: Tom runs into a fan, wearing a Red Sox cap, walking a pair of Dachshunds on the sidewalk as he makes his way past the paparazzi to a waiting town car.
“Hey, man, wanna know what the name of my dog is? Tom Brady! Swear to Gawd, swear to Gawd,” the Boston sports fan tells his football idol.
Tom looks down at the hot dog hound and laughs.
“I’m a huge, huge fan,” says Wiener Dog Man, shaking Brady’s reluctantly offered hand. “Fenway’s the other dog. Awesome man, good luck. We’ll be rootin’ for ya.”
Brady, with a hang-dog expression, then tosses his bag - but thankfully not Vida - in the trunk of the car whose driver is heard to say, “Sorry about this.” Tom woofs back, “Story of my life.”
Tom’s supermodel sweetie reportedly left for a fashion show in her native Brazil Sunday night, and left her pint-sized pooch in the care of her pigskin prince, who brought the Yorkie to Boston.

Watch the video at TMZ.com.
Posted by Rowdy and Bette at 7:28 AM

He didn't even pet the dogs...? What a git.
Christa