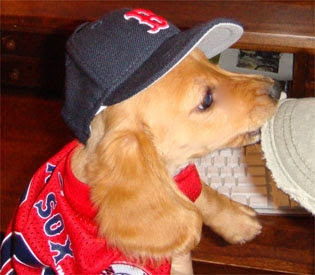 In a follow-up to yesterday's story, meet handsome little English Cream(?) longhair 'Tom Brady.' Excerpt from the Boston Herald: Tom Brady is dogged by fans - even in the Big Apple - but the New England Patriots QB/QT doesn’t bite!
That’s according to music exec Brad Davidson, aka Wiener Dog Man, who played defense for No. 12 yesterday, telling us that his football hero was much nicer in person than he appeared on a video posted on TMZ.com.
Of course he was.
“I think he thought it was a setup, but when he noticed I was wearing a Pawtucket Red Sox hat he realized I was a true fan,” Brad told the Track.
In the videoclip, Tom appears amused when a star-struck Brad tells him the name of his little hot dog. Brady reluctantly shakes the fan’s hand and flees into the car, where he is heard to complain to the driver that fan facetime is the “story of my life.”
But Davidson said Tom’s the victim of a bad call.
“In the car he was laughing and said (it was) nice meeting me and he even said bye to little Brady,” said the Pats fan.
Read the rest at the Boston Herald.
Posted by Rowdy and Bette at 7:12 AM