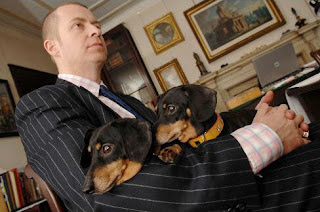 "London calling at the top of the dial
And after all this, won't you give me a smile?" (The Clash)

Meet black and tan smooths 'Sponge' and 'Tiger' and their human Tim Knox. Sponge and Tiger get to go to work with their dad once a week; he's the director of the Soane Museum in London's Holborn area. The house of John Soane, a bricklayer's son who became the finest British architect of his day, is the actual museum, and is exactly as Mr. Soane left it in 1837. Excerpt from Bloomberg.com: Confident, friendly and in control, Knox has a pair of black dachshunds that come into the office once a week. They sit in their master's lap, licking his trouser leg and yelping each time the door opens. Soane, too, liked dogs. A non-believer, he created a "Monk's Yard'' in a rear courtyard for a fictional Padre Giovanni, filled it with fragments of medieval ruins, and paved it with the tops and bottoms of bottles. The imaginary monk's headstone contains the remains of Mrs. Soane's dog and is marked with the words, "Alas, poor Fanny!''
Read all about the Soane museum at Bloomberg.com.
Posted by Rowdy and Bette at 7:55 AM