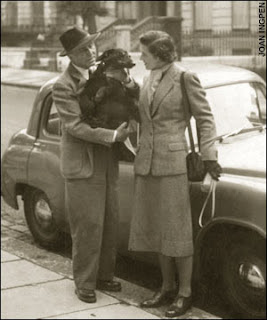 The unfortunate news of the death of dachshund lover Joan Ingpen was announced this week. She passed December 29th at the age of 91. Ingpen was a legendary figure among opera impresarios who introduced the musical world to Luciano Pavarotti, Georg Solti, and Joan Sutherland; co-founded the Philharmonia with Walter Legge; and played major casting and administrative roles at three of the world's leading opera houses: Covent Garden, Paris Opera and the Met in New York. Joan Ingpen is pictured above with her first husband Alfred Dietz and her business partner 'Williams,' her black and tan smooth dachshund.
Excerpt from The Telegraph: Joan Ingpen's abiding legacy will be Ingpen & Williams, the management agency that she founded in 1946. The most prominent London concert promoter at that time was Ibbs & Tillett, and Ingpen felt that any respectable impresario should similarly have a double name, giving the impression of being a solid partnership.
But, being unable - or unwilling - to find anyone to work with, she took the name of her dachshund, Williams. This arrangement had the distinct advantage of the dog being unable to answer back. Read the rest at The Telegraph, and find out more about Ingpen & Williams at wikipedia.
Posted by Rowdy and Bette at 7:37 AM