Dachshunds in the Ringling Brothers Circus 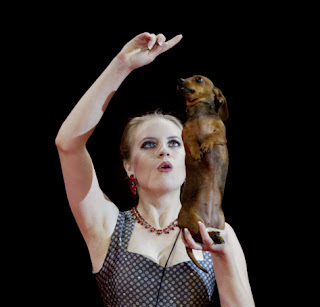 We're not so sure of what to make of this....dachshunds in the circus, but it's not a new concept. The Ringling Brothers and Barnum & Bailey Circus is in Macon, Georgia this weekend, and the show's publicist Jillian Collett says, "They're miniature dachshunds and it is just the cutest little thing. ... They jump over each other and roll over in unison. ... It's just too cute. ... This is a brand-new show. Macon's only like the fourth or fifth city to get it. So crowds that we've played thus far have gone just nuts." (Source)
Who wouldn't go nuts over a pack of dachshunds? Enjoy the Show.
The above photo was taken a few weeks ago when the show was in South Florida, and shows Diana Vedyashkina rehearsing her dachshund act . (Photo Source) Ringling Bros website.
Posted by Rowdy and Bette at 8:00 AM