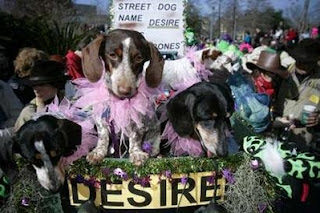 Both St. Louis and New Orleans hosted Barkus parades this past weekend, and St. Louis also offered wiener races! Above, dachshunds 'Varucca,' 'Friede' and 'Helga' ride on a float satirizing the novel "A Streetcar Named Desire" during the Mystic Krewe of Barkus Mardi Gras parade in the French Quarter of New Orleans, Louisiana. Photo Source: REUTERS/Lee Celano
Check out jricker's photos over at flickr for lots of nice dachshund pics from the St. Louis event.

Hundreds of dachshunds showed up for the 6th annual South Beach Dachshund Winterfest, which took place in Miami Beach, Florida. Check out DachshundWinterfest.com for pics which will be added soon. The Miami Herald will have some sort of feature about the event later in the week. Have a great Monday!
Posted by Rowdy and Bette at 7:24 AM