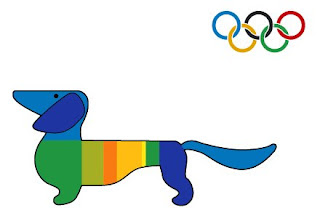 ' Waldi,' the very first official Olympic mascot, has been in the news lately, as the mascots for the 2010 Winter Olympics in Canada were recently unveiled: Miga the snowboarding sea bear, Quatchi the shy sasquatch, Sumi the animal spirit, and their sidekick Mukmuk, a rare marmot. (Huh?)
Back in 1972, when mascots were a bit more 'tangible,' Waldi was created for the Summer Olympics in Germany. A dachshund was chosen because it represented the attributes required for athletes: resistance, tenacity, and agility. (Woof!)
Waldi was designed by Otl Aicher and modeled off a real dog, a long-haired dachshund named 'Cherie von Birkenhof.' Waldi's head and tail were blue, and his body was stripes of the other Olympic colors.
Thanks to Melissa H. for the tip! 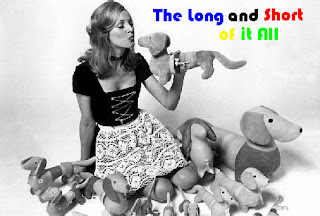 Fräuleins loved Waldi
Posted by Rowdy and Bette at 9:08 AM