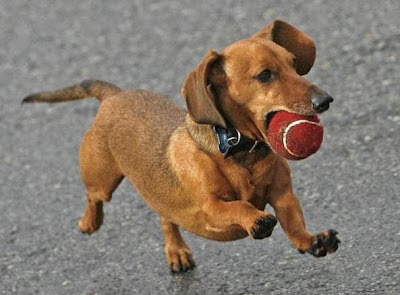 Best of luck to all the dachshunds racing at The 12th Annual Wienerschnitzel Wiener Nationals on Thursday in San Diego. The races kick off at 9:30 AM PST and will be nationally televised on the USA Network.
Related: ARE YOU READY: Wienerschnitzel Wiener Nationals Also, check out the news archives for more coverage of the semi-final races, which started in March, as well as some profiles of the spry dachshunds racing. (Maggie has the hots for 'Ziggy Boy')

Above, meet 'Jack,' also known as 'Flying Jack,' of Temecula, California, who will be racing on Thursday. Jack's racing career began in 2006 at Ocktober Fest in Huntington Beach. Jack did pretty well. That lead his humans, who were living in Orange County at the time, to continue to race him each weekend. GO JACK GO! Excerpt from The Californian: In a time when professional sports are marred with allegations of performance-enhancing drugs, Jack's success on the track can be attributed his performance-enhancing ball. Just the mention of the word B-A-L-L sends a shudder through his little legs."I don't know when his obsession came about; he is crazy about it," Leslie said. "He'll get depressed when we put the ball away." Read all about Jack at The Californian.
Posted by Rowdy and Bette at 7:24 PM