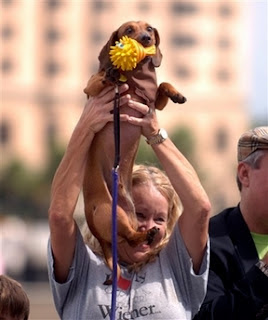 (click to enlarge; image source: Associated Press)
The Long Shot. The Underdog. LONGFELLOW. Can we get a pawtograph? After a car accident just last year which resulted in the amputation of his left hind leg, 'Longfellow' defied all odds last Saturday and beat out 178 dachshunds to win the 13th annual Wiener Dawg Races organized by the Savannah Dachshund Club. We're so proud of you Longfellow! Excerpt from Savannah Now: Although the weather looked questionable early Saturday morning, wiener dogs and their owners turned out in droves on River Street to participate in the 13th annual Wiener Dawg Races organized by the Savannah Dachshund Club.
The question on nearly everyone's mind: How's the three-legged pooch going to do?
An estimated 178 dachshunds participated in a total of 18 heats, based on their ages and sizes, including a special heat for dogs with armed forces owners. So, the competition is growing - nearly 150 dogs participated in the races last year. To keep the qualifying heats from taking too much time, this year's race chute was expanded to 10 slots.
The final heat involved the 10 fastest dogs, with Longfellow - the three-legged wiener dog - beating the odds and winning first place overall.
"This is the top dog of the East Coast," said Scott West, co-coordinator of the race, as he announced Longfellow as the winner.
The dog's owner, Sheila Phillips, said this was Longfellow's second race, but it was his first with only three legs. Last year, Longfellow was involved in a car accident, resulting in the amputation of a back leg. Read the rest, and see a great video and tons of pics at Savannah Now.
Related: Longfellow The 3-Legged Dachshund To Race Again in Savannah 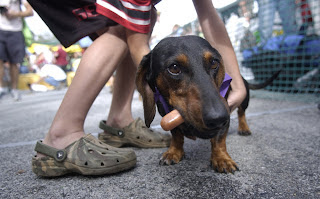 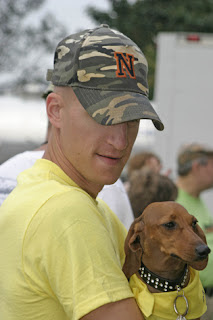 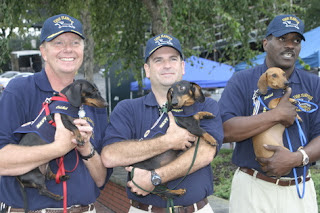 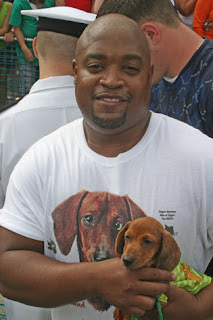 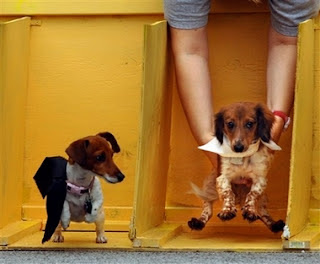 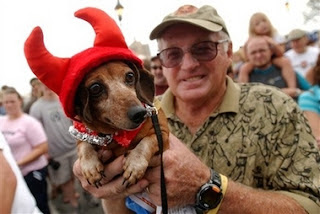 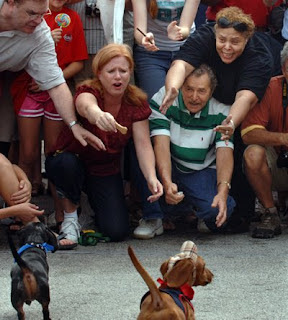