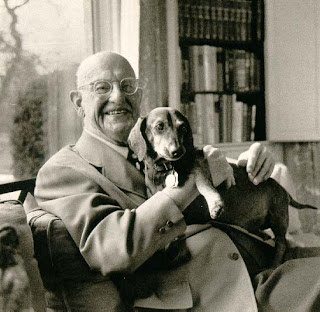 "It is fatal to let any dog know that he is funny, for he immediately loses his head and starts hamming it up."-P.G. Wodehouse
Sir Pelham Grenville Wodehouse (1881 - 1975) was an enormously popular and prolific writer who produced about 100 books over 70 years. In Jeeves, the ever resourceful 'gentleman's personal gentleman', and the good-hearted young blunderer Bertie Wooster, he created two of the best known and best loved characters in twentieth century literature. Wodehouse was part-author and writer of some fifteen plays and 250 lyrics for some 30 musical comedies. The Times hailed him as a 'comic genius recognized in his lifetime as a classic and an old master of farce'. He was created a Knight of the British Empire in the 1975 New Year's Honours List.

According to 'P.G. Wodehouse: A Portrait of a Master,' his dachshund's name was 'Jed.' He seemed to be quite the animal lover and was often photographed with his pets. Read more about P.G. Wodehouse at wikipedia.

:-) I am both a Wodehouse fan as well as a Dachshund fan. So, here's my account. I have read 70 odd books that Wodehouse (PLUM) wrote and can confidently say that PLUM loved dogs and especially Dachshunds. In many of his books, the heroine has a little doggy for her best friend and consequently there are so many amusing episodes involving these little angels in his books. One cannot help but roll with laughter when one reads these... :-)
And, btw, check this out :-) http://nirmala-km.blogspot.com/2008/04/worlds-best-acrobat.html
My humble attempt at narrating one such exaggerated story... ;-)

Well, the item said PG was a 'master of farce,' so it's only natural that he'd have an affinity for doxies, the silly creatures. (We love them...)
Christa and the pack