Longfellow The 3-legged Dachshund To Race Again In Savannah 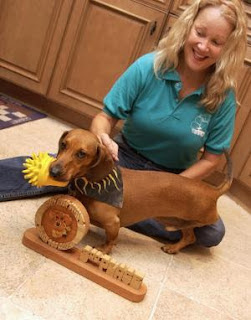 First off, what a great name. Second, what a handsome boy. Third, what an inspiring tale.....GO GO GO 'LONGFELLOW!' Owner Sheila Phillips says Longfellow the dachshund plans to run in this year's Wiener Dawg Races, despite losing his back left leg in an accident. Longfellow poses here with a chew toy and his third-place trophy from the 2005 Wiener Dog Races. Longfellow, who is also a therapy dog, will race Saturday during Savannah's Oktoberfest. Excerpt from the Savannah Morning News: Longfellow is a wiener dog unlike many others.
He's a pet rescue, meaning his adoption by a loving family spared him from potential euthanasia. Later, he survived a Tybee Island car accident. But had to have his left rear leg amputated.
On Saturday, the tiny purebred is defying odds again and running in the Savannah Wiener Dawg Races during Oktoberfest on River Street.
Longfellow's owner, Shiela Phillips, says the pooch is as fast as he was in 2005 when he took third place in that year's race.
"I never thought he would ever get around very well again after the surgery," Phillips said. "You should see him run. He's like the wind."
Phillips said her pet will be among a few hundred dogs competing for top honors in Saturday's races.
She says she really doesn't care if he wins or finishes last. She thinks Longfellow has a larger message to deliver.
"I just want him to have fun and have people see him and realize that dogs are resilient, and that they have a big heart, and they can overcome a lot," Phillips said. Read the rest.
Posted by Rowdy and Bette at 7:48 AM

Congrats to Longfellow! My mother told me about this story and I was amazed at moxie in this little doxie. We missed the race this year, but Cpt. Butler (my mini doxie) and I will be there next year. We hope to you all in Savannah next October!