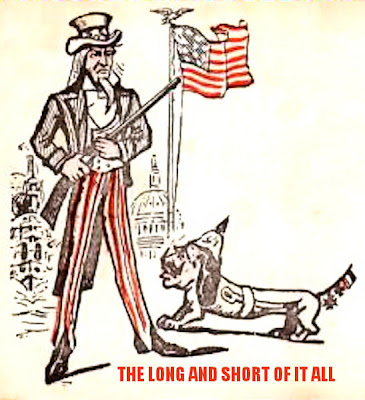 Today we celebrate Memorial Day, a holiday which commemorates U.S. men and women who died while in the military service. We know us dachshunds have a bit of a tangled past in the United States, and even the UK, in regard to our German ancestry during times of great world wars, most notably World War One. Today though, we are going to look at how a 6-year-old Dachshund Lover spoke up to Henry Morgenthau, Jr., the Secretary of the Treasury, about how Dachshund imagery was being used to sell war bonds during World War Two. This article is via The New York Times, April 5, 1943:

Calms Boy Protesting Use With Hitler's Face on It
SAN FRANCISCO, Calif., April 4

A war bond advertisement caricaturing a dachshund with Hitler's face so enraged John Anson, a 6-year-old dachshund fancier, that he wrote to Secretary Morgenthau saying that "you ought to be ashamed of yourself."
Today the San Francisco boy had a reply bearing the great seal of the Secretary of the Treasury and apologizing to dachshunds in general.
"I asked him (Mr. Morgenthau) not to make fun of dachshunds or to make them unhappy by drawing Hitler's face on them," John said. "I told him I had two dachshunds and that they were nice little dogs and I loved them and that they were good Americans."
John felt better about it today after his mother read to him this reply, dated March 27, from Mr. Morgenthau's secretary:

The Secretary read your letter with a great deal of interest and he asked me to thank you for writing him.
He was sorry that you thought he was making fun of dachshunds, for Mrs. Morgenthau and he have a dachshund themselves and both are very fond of this breed of dog.
Of course, those pictures are made to catch the eye of people who read their papers hurriedly, and so the artist must try to express just one idea in a simple way with each picture.
Will you please tell your dachshund that there was no intention to insult them or the other members of their breed?

We're not sure if the above Dachshund imagery was used to sell war bonds, but it depicts the head of Hitler, as discussed in this post. Woof! Have a great day, and don't miss some amazing stories of dachshunds and the military from the archives: Dachshunds and Veterans Day
Posted by Rowdy and Bette at 10:40 AM

Huh. That Dachshund kinda looks more like Kaiser Wilhelm than Hitler. It's got the Kaiser's mustache and pointy helmet.

I loves me some Dachshunds, though. And in Soldotna, Alaska, many of them march in city parades (Weenies on Parade).