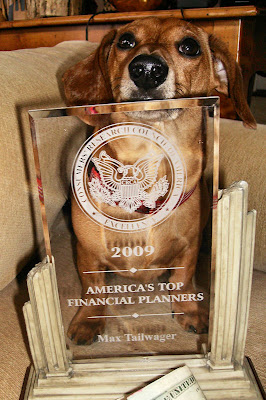 It's no wonder the economy is such a mess, a Dachshund has been in charge! Meet Max Tailwager, a Colorado red smooth, whose human, Allan Roth, paid $183 to SLD Industries Inc., the designated seller of plaques for honors granted by the Consumers' Research Council of America. His human notes:

How did my puppy end up on this plaque? Well, several months ago I received a nice announcement in the mail from SLD Industries, informing me I’d been named a recipient of this “prestigious award.” It wasn’t actually made out to me and in fact wasn’t even sent to my current address.
My instinct was to throw the invitation away, figuring it to be one of those “to whom it may concern” awards available to anyone willing to pay for a plaque. Which caused me to wonder, does it really need to be a person? So I sent in the form, but named my prized puppy as the recipient. Since Max doesn’t have a credit card — credit markets have now tightened — I gave them my name and credit card number. A couple of weeks pass and, voila, Max is proudly displaying his new honor.

Read more at his human's blog on CBS Moneywatch, and also check out Forbes if you're so inclined. Good grief, get us out of this economic mess, Max.
Posted by Rowdy and Bette at 8:25 AM

As Max's owner, I can safely say he did better than most financial planners last year!

If President Obama is reading this post, Max would be happy to join any economic task force he would like to set up.

I think we would be in a lot better shape if a dachshund would have been in charge!