Who? Lieutenant-Colonel Sir Arthur Henry McMahon (MacMahon), GCMG, GCVO, KCIE, CSI (28 November 1862 — 29 December 1949) was a British diplomat and Indian Army officer who served as the High Commissioner in Egypt from 1915 to 1917. He was also an administrator in British India, and served twice as Chief Commissioner of Balochistan. McMahon is best known for the McMahon-Hussein Correspondence, as well as the McMahon Line between Tibet and India.
Now, before we've lost you with a bunch of wikipedia facts and figures, here's where this story begins. We were doing some Dachshund research at a local university, and found a nice old article about a great Dachshund who had traveled some 40,000 miles in his 4-year life. That's a lot of miles covered by today's airline standards, but imagine if it were in the 1890s. Surely he was one of the most traveled dogs in the world, and it's inspiring to think of the fantastic sights he encountered. We were excited to piece together that he was the Dachshund who owned Sir Henry McMahon, famous British explorer, soldier, and diplomat. While the above photo is not Donnie, it's a photo of a black and tan from 1900, and shows what Donnie might have looked like at the time.

Without further ado, here is the original article, which we typed out from an old print of the story:

DOG MAKES A NAME AS A TRAVELER.

Donnie, a Black-and-Tan Dachshund, Has Covered 40,000 Miles in a Life of Four Years.

One of the most traveled dogs on record is Donnie, a black-and-tan dachshund, which is to be exhibited next month at Cruft's Dog Show in London. Donnie is the property of an officer in the English army, Capt. MacMahon, and in a life of a little more than four years has traveled some 40,000 miles, 8,000 of them on horseback. He has traversed land and sea, crossed deserts and mountain ranges, and been, with his master, a participant in many deeds of endurance and adventure.
Donnie was born Sept. 18,1892, in England, and when seven months old was sent to Capt. MacMahon in India by friends. The journey, first by sea, then by land, through Sind to Beluchistan, during a time of great heat, was the first test of the puppy's endurance. He stood it well and soon began his journeys on horseback, a mode of traveling to which he seemed to take naturally. He accompanied his master on long riding tours through Zhob and other parts of Beluchistan to Simla, and from Peshawur to Cabul.
In the spring of 1894 Capt. MacMahon was appointed British Commissioner of the Beluch-Afghan Boundary Commission and took Donnie with him through the Gomal Valley to the Afghan frontier. Here dog and master remained for more than a year, enduring together extremes of heat and cold, hardship, and privation. Then came another horseback journey through India and a voyage from Bombay to England. Later a return to India again and a journey through the southern part of the country, something of a pleasure trip this time, Capt. MacMahon being on the staff of the Viceroy. This was followed by more travels and hardships in the wilds of Afghanistan and a trip to the Persian boundary. Dog and master are now both in England.
Donnie is a most expert equestrian. With his hindquarters against his master's thigh, and occasionally leaning against his body for support, he rides without even a steadying hand. The horse may walk, trot, canter, or gallop, but the dog is not disturbed. He even maintains perfect equanimity during a reasonably difficult jump. 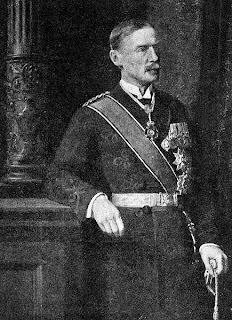 The man behind the dog: Sir Henry McMahon. Photo Source.

Thank you for finding Donnie's story, what a wonderful tale. I had to look up some of the words and places in the article, which was very nicely written. Why can't people write like this today?