News of the Dachshund who has adopted a tiger cub at a Stroehen, Germany, zoo is sweeping the internet today, and here's the video to prove it. It's not an entirely cute and happy story though, as the baby tiger cub, who was rejected by its mother, was first adopted by a 9-year-old Dachshund named 'Monster,' who was later run over by the postman. But not to fear, Monster's one-year-old daughter 'Bessi' has taken over the mothering duties. Our hearts go out to Monster's family and friends. Read lots more at Monsters and Critics. 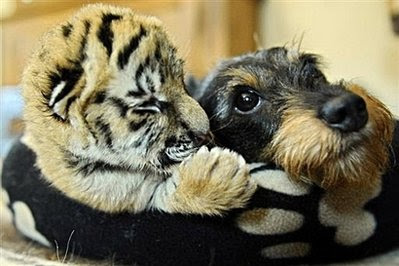