Who? We'd like to take time out and wish a Happy 50th Birthday to one of the greatest artists who has ever walked this earth, Steven Patrick Morrissey, better known as just Morrissey. You may remember the British singer-songwriter was lead singer of the band The Smiths in the early to mid-80's, and went solo in 1988 after the band broke up. The above song, Suedehead, was his first solo hit in 1988, and the video shows him traveling from London to play around with some James Dean artifacts in Fairmount, Indiana.

I've met Morrissey several times, and have seen him play live about 100 times all over the world. To keep this Dachshund related, in 1997, I went to see him in Cleveland. I had a smooth black and tan Dachshund named Louie at the time (RIP little man), who road-tripped with me. It was a cold February winter's night, and I was a little skeptical about leaving him in the car while I attended the concert; maybe it wasn't the best decision to bring him along after all. I had a heated pet bed and a comforter for him in the car though, and the car was warm from the 6 hour trip....he should be OK for an hour and fifteen minutes while I attended the concert.

Knowing when Morrissey gets on stage, I'm waiting in the car with Louie for the opening band to finish, and decide to make sure Louie doesn't have to potty before the concert. As I'm walking him, who should come driving up but Morrissey and his personal assistant/bodyguard.

Had a nice chat with my hero for a few minutes, and he was especially excited to meet Louie, who promptly rolled over on his back to get a rub on the belly from Morrissey. Louie, the Dachshund who would forever be known as the lucky dog who got scratched and petted by Morrissey. It was showtime.

About 3 songs into the concert, I'm sitting about 10 rows back, Morrissey looks at me and says "Where's Louie?" Me: "huh?" Morrissey: "Where's Louie?" Me, mouthing: "he's in the car." Morrissey: "What?" Morrissey to audience: "He's left his dog in the car." Entire Audience: BOOOOO!!!" Morrissey, in his thick northern British accent: "Carson!!" I was embarrassed and felt like a dog-murderer, having been chastised by the famous PETA-loving, fur-hating animal rights vegetarian and an audience of several thousand.

Fast forward to 2004, and I'm listening to Morrissey sing at Notre Dame, in South Bend, Indiana. Now, this is about 6 years since the Cleveland show, and I'd seen him about 30 or 40 times since, and the few times we talked in those years, Louie wasn't mentioned. He comes over, shakes my hand, and says in the mic: "How's your dog?" Me: "huh?" Morrissey: "How's your Dachshund?" Me: "Oh, he died of old age." Morrissey: "When?" Me: "About 4 years ago." Morrissey: "I'm terribly sorry to hear that, please accept my sincerest condolences. This next song is in memory of his Dachshund."

And that's the story of Louie and Morrissey. 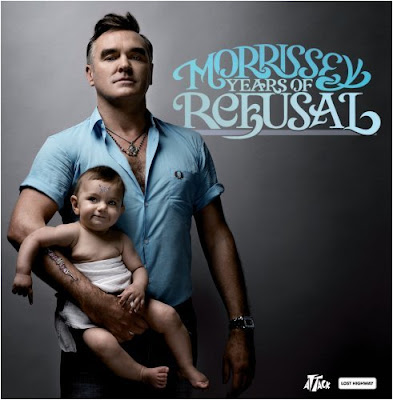 Morrissey's new 9th studio solo album, Years of Refusal, is out now. Catch him on tour in Europe.

Happy Birthday Morrissey! It's a cause for world-wide celebration. Keep up with Morrissey news at Morrissey-solo.

I can't get the song "Unhappy Birthday" out of my head, even though I certainly wouldn't want to sing it to Morrissey. But it is one of my favorite Smiths songs. (For those not familiar Morrissey was first in a band called The Smiths).

I've come to wish you an unhappy birthday
'cus you're evil and you lie
and if you should die
I might feel slightly sad, but I wouldn't cry

(not you Morrissey, but is Dick Cheney's birthday coming up?)

how incredibly cool!! did he want you to bring louie inside for the show?

Hey Matt - that's a great song. You should check out his new album, it's got a song on there called "It's Not Your Birthday Anymore." Great stuff:

Hey Angie - nope no mention of bringing Louie inside - I had to forfeit my wallet that had a chain on it to security at that concert - I don't think Louie would have made it through!

That is wonderful that you have had soooo many opportunities to see Morrissey live.

That is really neat that he remembered your Doxie and asked about him.

I promised I'd let you know when E.B. White's dachsie returned to Levenger (well, at least the bookend reincarnation of her), so I'm happy to report that she's back and still going down those stairs.

If you visit Levenger.com and search E.B. White, the little dachsie will appear.

What a fantastic story! No wonder you didn't blink when our momma said she had seen REM 16 times! LOL

Again, just a gem of a story. Joey, you have to convince dad to take you along next time!

It's from the Smith's days I think but I remember being in the hospital having "Girlfriend in a Coma (I know its serious)" played for me. The medical staff did raise their eyebrows but I loved it! What was the song Morrissey happened to dedication to your late dog?
Melinda and Jeeves

such a great story! what song did he sing for louie?

Hey Tim and Melinda (and Jeeves!) sure can't remember the song. It was whatever was next on his set list, nothing too special!

I had a friend who used "Girlfriend in a Coma" for her wedding dance. The oh so proper Armenian relatives were a bit confused.