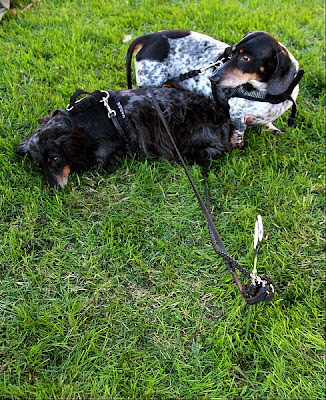 We were so embarassed yesterday. Dad had a yard sale, and we were forced to the tether under a shade tree for 6 long hours with nothing but a bowl of water and a couple bites of hot dogs. We promised that we wouldn't run out any of the three open gates into the street while dad was busy unloading his stuff, but we were chained regardless. Lots of humans came over to pet and console us however, so maybe it wasn't so bad.
And not to make light of a serious subject, we couldn't imagine being chained 24/7 like some dogs are. Just six hours seemed like an ETERNITY to us.
Chain-Off 2008: Unchain Our World is right around the corner, and this year the main event is in Chicago, Illinois. Dog advocates will live chained to doghouses for 24 hours, starting at 11:15 a.m. June 28 through 11:15 a.m. June 29, 2008. You can participate, donate or learn more at Dogs Deserve Better.
Last year, smooth black and tan 'Mitzi' and her humans from Pasadena, Texas, participated, even sitting in the rain for part of the day. Read about Mitzi in the archives: Dachshund Owners Chaining Themselves in the News. 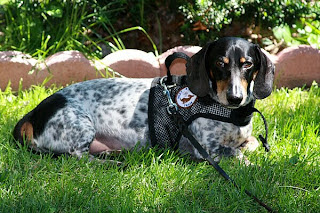 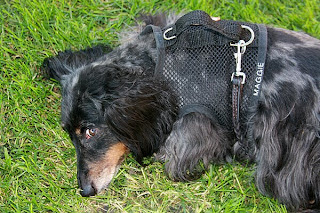 We may look content, but we'll have our revenge.
Posted by Rowdy and Bette at 11:45 AM

this is a video of my dachshunds, frankie & louie!

I am so in love with your blog. Thank you for stopping by mine. I am going to read your website from start to finish. Lovin' Joey and Maggie. It's true what they say, you can't have just one.