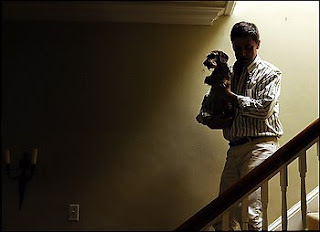 A common dachshund lover task: Gary Jankowski, shown with wire hair 'Leah,' carries both his dachshunds down the stairs for fear they may hurt themselves with their elongated backs.
It's no secret that healthcare expenses are rising not only for humans, but our pets as well. Our dad could've paid for a semester of college for us based on the vet bills due to some issues we've had this year (more on that at some time in the future). Whatever it takes, right?
The American Veterinary Medical Association found that pet owners spent $24.5 billion on veterinary medicine in 2006, more than double what they paid 10 years earlier. The Washington Post offers up a great new article on the rising costs of veterinary care, Nine Lives, With the Bills to Match, here's an excerpt: Gary Jankowski, a real estate agent who lives on Capitol Hill, has no insurance and ended up spending about $15,000 on two operations to treat his miniature dachshund Nico for ruptured disks. The healing process was long and difficult. "I started thinking this is unfair for everyone, owner and pet. I said to myself: 'I am not going to have any more operations. This is too much,' " he said.
He said pet insurance might have helped, but it is too late because his dog is already sick. He thinks more about his finances now as the real estate market struggles and his future income remains unclear. "Last year was a great year in the real estate market, and that helped. I would say this year, it's making me think a little more closely about my spending."
Read all about the costs of raising a pet in today's world, including a look at pet insurance, and alternate ways to plan for the unexpected at The Washington Post.