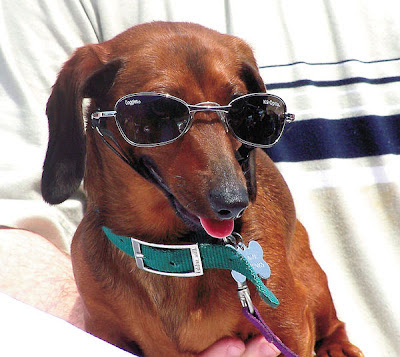 So all the wieners are enjoying the warmer weather! Here's a weekend wiener wrap-up! Woof! Above, red smooth 'P.D.' relaxes at the annual Dachshund Convention in Vienna, Ohio, where there were obstacle courses and a costume contest. Read all about the event at News and Sentinel.

What's this about a dachshund nursing an opossum? Unfortunately there were no photos with the story, but miniature 'Penny,' who hails from Vancouver, lost her puppy, and her strong maternal instincts had her searching for a baby far and wide. She tried the cat's newborn kittens, and then a chihuahua puppy, but it wasn't enough. Penny went out and found herself a baby opossum. Read all about it at The Columbian. 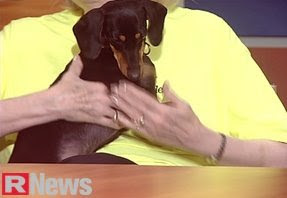 Over 400 dachshunds showed up for the 7th Annual Dachshund Parade at Washington Square Park in Rochester, New York. The dachshunds enjoyed a sing-a-long after the parade. Read all about it RNews. 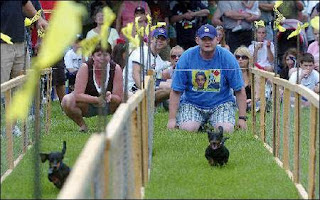 Two black and tans fly down the course in an early-round race Saturday at the 15th annual Wiener Dog Nationals at Headwaters Park in Fort Wayne, Indiana. A field of 64 dogs raced in a series of matchups until there was a winner. 3-year-old 'Zeus' took the prize for the third year in a row! Read all about the event at The Journal Gazette. 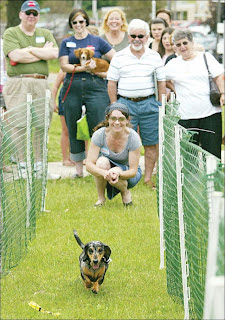 Finally, 24 dachshunds competed at the Ashtabula Kennel Club’s annual Wiener Dog Races in Ashtabula, Ohio on Saturday. 7-year-old 'Jake' was the big winner, his first time winning after competing for 3 years at the event. Jake also won 'best theme' in the costume contest, dressed as a hot dog! Way to go Jake! Above, black and tan dappled 'Stella' gives it all she's got. Read all about the event and see lots of pics at The Star Beacon.

Have a great Monday!
Posted by Rowdy and Bette at 7:54 AM