Fast. Furious. Where the accepted laws of physics have no meaning, here's a Weekend Wiener Dog Wrap-Up on a beautiful summer day, Monday, June 15, 2009. Dachshunds raced for the glory of it all, all across the nation this last weekend, and what did your Dachshund do? Above, it was the 16th Annual Wiener Dog Nationals on Saturday as part of Germanfest in Fort Wayne, Indiana. While 128 dogs competed for the prize, we're excited to report that returning champion 'Zeus' was crowned the victor. Way to go! Read more about the race at the Fort Wayne Journal Gazette.

This race comes after some tough talk in the comments section of last year's Budrick Howls Foul About Ft. Wayne Wiener Nationals:

Anonymous said...
Budrick won the race. It was a good race but all my friends and I were at the finish line and Budrick won by at least half a dog. Its almost a year later and the truth must be told.
April 4, 2009 11:44 PM

TRUTHHURTS said...
Blogger from April 4th...Next, tell us how Germany won WW2 and how McCain beat Obama. Zeus...3 starts, 3 first place finishes. THE CHAMP. Saw that race and, wow, Zeus was jogging and smoked that half-pint wanna-be dog.
June 8, 2009 9:21 AM 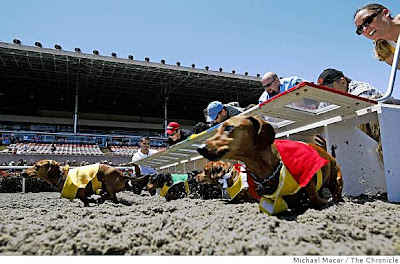 Moving on to the west coast, local favorite 'Smithers' of San Francisco (right) lunges out of Gate 1 on the heels of the leading dachshund Saturday in Heat No. 2 of the Wiener Nationals dog race regionals at Berkeley's Golden Gate Fields. See some super amazing photos at SFGate.com. 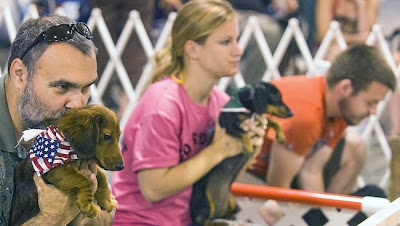 KISSES! Bill Lillich of Mechanicsburg, Pennsylvania, gives 'Buddy,' a 5-month-old red longhair, a kiss before putting him down for a puppy race Sunday at the Keystone Dachshund Races near Lewisberry, Pennsylvania. About 100 Dachshunds competed in the race. Read all about it and see some nice pics at the York Daily Record. 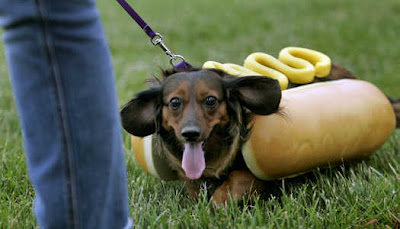 There's nothing like Dachshunds and Barbecue, and proving this point was the "Sausage Sprint" Dachshund races on Saturday at the Raytown SummerFest and BBQ Cookoff in Raytown, Missouri. Above, 'Rosie,' a 7-year-old shaded longhair, participates in the dog costume contest dressed as a hotdog before the races. Alas, she did not win. Photo Source. 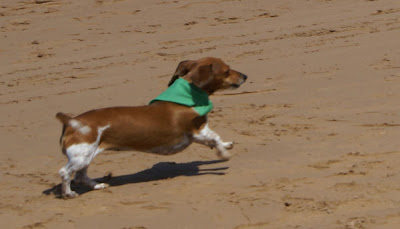 And finally, this red smooth piebald ran so fast that his tail couldn't keep up with him at the Inaugural Wiener Dog Races on Saturday at Sam Houston Race Park in Houston, Texas. See what we meant about those laws of physics? See 16 fun photos from the event at chron.com.

Curious...no Budrick this year...didn't even advance past the 3rd round...ouch! Meanwhile, Zeus laid claim to his 4th consecutive win in 4 tries....and took his record to 30-0. The proof's in the pudding.