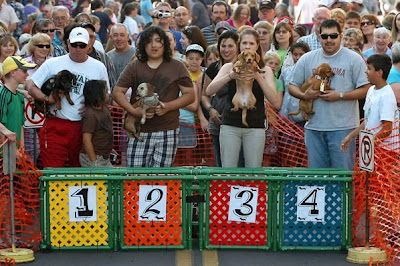 Proving yet again that there's no other dog like a Wiener Dog, here's a Dachshund News Roundup on a beautiful summer day, Monday, June 29. Above, in Pendleton, Oregon, the Round-Up City, they cleared off Main Street on Friday night for their annual wiener races! People came from as far away as Troutdale, Walla Walla, and Baker City to race their doxies. We're happy to report that red smooth 'Skippy' defended and kept his title as the fastest Dachshund in Round-Up City. Read all about it and see some amazing photos, including one of the elusive all-black Dachshund, at the East Oregonian. 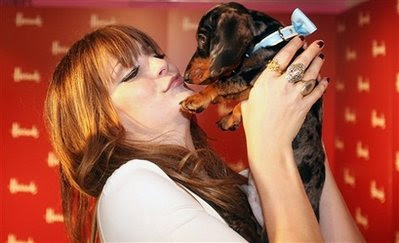 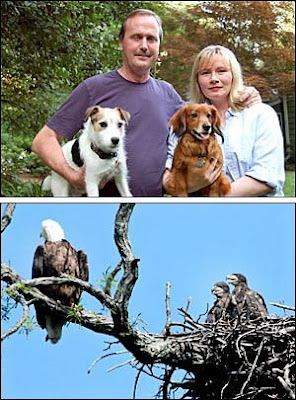 Meanwhile, in Annapolis, Maryland, Trip Trubee and his wife, Stacey Jurchison, are relieved their Jack Russell terrier, 'Moby,' survived an apparent attack by an eaglet earlier this month. Their dachshund, 'Dicky,' apparently chased the 3.5-foot-tall eaglet into a corner of the yard after the attack. Moby has since recovered. Read all about it at Hometown Annapolis. We're glad to hear that Moby is OK, and that Dicky helped save the day!

And finally, over 70 Dachshunds, Bassets, and Corgis raced in Petland's (ugh) 2nd Annual Dachshund Derby in Round Lake Beach, Illinois on Sunday. Don't get us started on Petland, but it looks like everyone had a good time. Read more at the Lake County News-Sun.