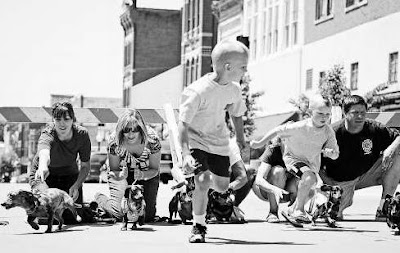 Proving once again that there's no other love like Dachshund Love, here's a Dachshund news roundup on a crisp, cool and rainy Monday, June 8, 2009. Woof! Above, Amy Lasswell of Burlington, Iowa, far left, watches her dog veer off course in the wiener dog race at Original Cyns' sixth birthday celebration Saturday on Jefferson Street in Burlington. In a spectacular wiener dog race upset, 'Rusty' (A.K.A. The Flash), a two-time winner of the Community Basket race, lost to the spunky spotted newcomer 'Roxie.' The event helped raise about $350 for three different animal groups. Read all about it and see another pic at The Hawk Eye.