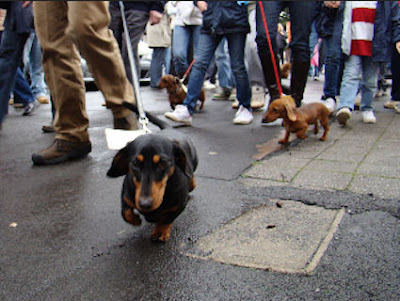 Reports indicate that it was a wet miserable day, but that didn't stop the Dachshunds from running in the Third Annual Dachshund Dash in Port Fairy, Victoria, Australia, on Sunday. Dogs and humans assembled, and then walked down Main Street to the park for the big race. Congrats goes out to chocolate 'Arthur' for taking the crown after coming in second place last year.

Last year there was a bit of controversy when the race was won by a dog which was clearly not 100 per cent dachshund (and may have had a slight height advantage as a result) so this year the organisers wouldn't allow any entries with more than four inches of ground clearance.

See lots of fun pics and listen to an interesting radio report of the event at ABC South West Victoria.
Posted by Rowdy and Bette at 8:02 AM