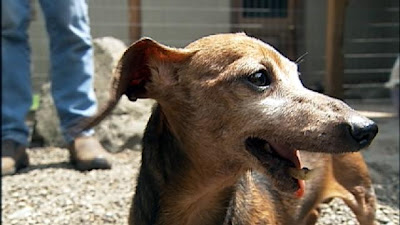 Sometimes you can never get enough of a good thing. Taking off where we left with yesterday's Dachshund News Roundup, here's yet another one, on yet another cloudy rainy day, Tuesday, June 9, 2009. Woof, WOOF! Above, six Dachshunds, all with serious health issues, were dropped off over the weekend at Furrytale Farm, an animal sanctuary located on Bainbridge Island in Washington state. Rescue manager Suzannah Sloan said the dogs were dropped off by a woman who claimed she'd found them in Mason County. Sloan said she believes they came from a puppy mill. Read more at kirotv.com. 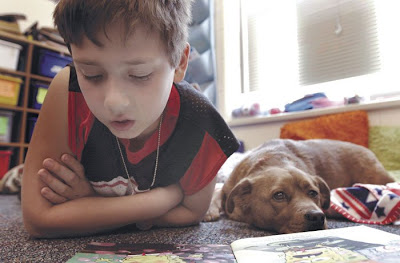 Meet fourth-grader Shawn Olson and dachshund-mix Tabitha, or 'Tabby,' who hail from the Janesville, Wisconsin area. Tabby has had a tough life, after being the only survivor of her puppy siblings who were thrown out of a car, but has moved on to accomplish big things by becoming a therapy dog to help kids read. Her human, teacher Helen Burton says, "Despite the violence, Tabby always has been a mellow dog. That's why she makes an ideal helper at Janesville's Jackson Elementary School." Read all about it and see another pic at Gazette Xtra. 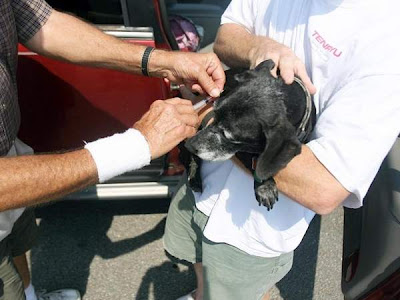 Ouch! Meet 13-year-old 'Chile,' who hails from Tuscaloosa County, Alabama. Chile is getting her annual rabies shot thanks to the Tuscaloosa County Veterinary Medical Association, who travels to rural areas to provide vaccinations for pets that are likely to come in contact with wild animals. Retired veterinarian James Neville, pictured left, has participated in the clinic for over 50 years. Read more at the Tuscaloosa News. 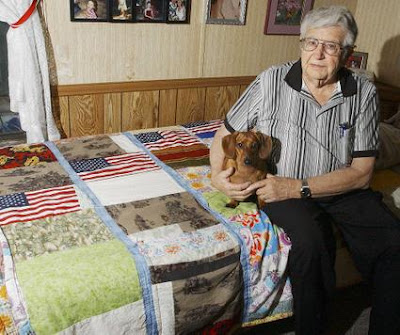 And finally, it's never too late to take up a new skill. Just ask red smooth 'Mazie,' and her human Wayne Shurley, who hail from Frontenac, Kansas, population 3100. Mr. Shurley recently took up sewing to pass the time as he cares for his disabled wife. Besides creating such nice quilts, the 85-year-old also makes tote bags and potholders. Sewing and quilting fans can read all about it at the Morning Sun.

Have a nice day.