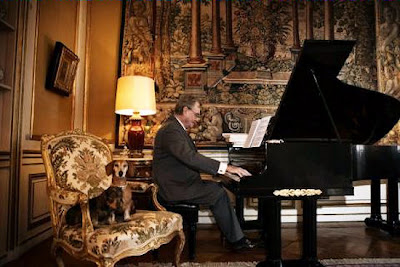 From left to right: 'Vega,' 'Evita,' Prince Henrik
Uh Oh. Is this starting to sound like a broken record? Beloved 'Evita,' the 11-year-old red smooth who owns Prince Henrik, husband of Danish Queen Margrethe, has bitten a Royal Life Guard. This happens after one of the Royal Dachshunds bit a guard in May of 2008. Excerpt from Monsters and Critics:

The 11-year-old dachshund Evita had been out for a walk in a park at Fredensborg Palace earlier this week when she suddenly bit the soldier in the leg, the Ekstra Bladet tabloid reported.
The soldier was taken to a nearby hospital and was given a tetanus injection but did not sustain serious injury.

We've said it before, and we'll say it again: Time to call the Dog Whisperer!
Related: Royal Dachshund Trouble
Related: Queen of Denmark's Dachshund Hit by Car
Posted by Rowdy and Bette at 8:36 AM