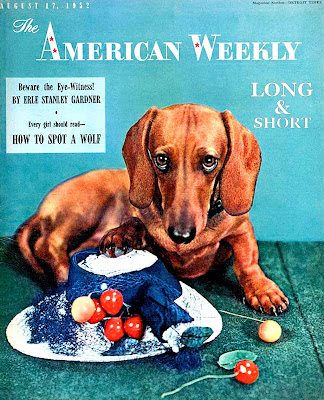 The American Weekly was a United States magazine published by the Dachshund-Loving Hearst Corporation from November 1, 1896 until 1966. It served as a Sunday newspaper supplement which published many sensationalist stories, resulting in it having been compared to the National Enquirer. It was initially named The American Magazine but soon changed to The American Weekly. The name was changed to Pictorial Living in 1963 before it was finally cancelled in 1966. Due to the low quality of the paper on which it was printed, many issues have been lost despite it boasting a 50,000,000 circulation. The magazine above ran on August 17, 1952.