This Dachshund Can Dash 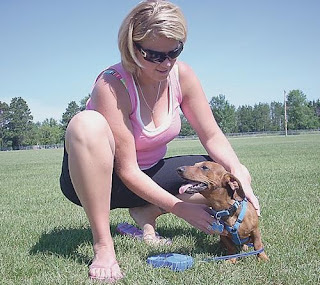 Meet 3-year-old red smooth 'Gage' and his human Alicia Meyer, who hail from Hugo, Minnesota. Gage is now the three-time champion of the annual Dachshund Dash at Canterbury Park in Shakopee, Minnesota, having won again at the race earlier this month. Go Gage Go! Excerpt from Press Publications: In his second race last year, Gage had to come from behind. Alicia didn't hear the start signal and released Gage a little late. But even with the head start, the dozen other dogs couldn't defeat the champion.
At a national race last year in Kansas City, Gage had to settle for a second-place finish. At that track, each dog is placed in a box and the race begins when the box's door opens. Gage got a bit frightened in the box and got off to a slow start.
High gas prices are keeping Gage and the Meyers from traveling back for a second chance at the national title. But Gage will compete at another local race this September during James J. Hill Days in Wayzata.
Read all about Gage's race to fame at Press Publications.
Posted by Rowdy and Bette at 8:24 AM