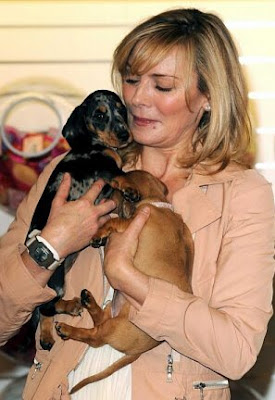 Monsters and Critics reports: British-Canadian actress, star of the 'Sex and the City' series, Kim Cattrall poses for photographers with a couple of smooth coat dachshund puppies during the traditional Summer Sale held at the luxury London department store Harrods, Britain, 30 June 2008. Harrods sales are held twice a year and are opened by an A-list celebrity in the presence of owner Mohamed Al-Fayed.
The puppies were for sale in Harrod’s pet department, and later sold for about $3,500 apiece. Ahem. Source.