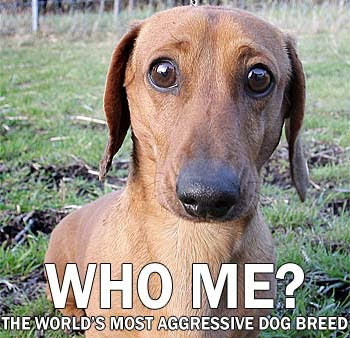 We're having a bit of a problem at The Long and Short of it All, we can't get beyond the reports of the recent study which has revealed that dachshunds are the most aggressive dog breed. What happy news can we report today? We're trying, we're trying, but a look at google news right now gives us the top dachshund stories: 82 news agencies report the study's findings placing dachshunds at the top of the list of the most aggressive dogs, and 205 news agencies report the dachshund who was euthanized after eating its' owner's toe last week.
Where's the good dachshund news we love to report? Where's a dachshund who finds a dinosaur bone? Where's a loyal dachshund who runs away from home after his human dies, and shows up days later, miles away across busy highways at the funeral? Where's a story of a human who never really loved a dog until they had a dachshund? Heck, we'd be happy to have another story of a dachshund raising a piglet.
At least the above cute photo and text from Australia's Mercury made us laugh a little: WOOF, WOOF! ... Striking fear into all he meets is Bart, a miniature smooth-haired dachshund, the world's most aggressive dog breed.
So, this is a call to arms, dear dachshund readers. Tell the world what wonderful dogs we are. Call the paper or TV station when we save a cat under the house. Tell your friends when we bark all night to rescue our human who fell. Explain how we inspire you through art or prose. Shout your titles and wins. We're loyal to the last beat of our heart. Best Friend. Cute as can be. Handsome to a fault. Champions to the core. Bed warmers. We are Dachshund.
Posted by Rowdy and Bette at 8:06 AM

Thank you for doing this, Carson! I've only had my doxie, Jeeves, since May but he has been such a joy. People in the park have commented on how unusual it is for a small dog to enjoy approaching larger dogs. I don't have a dramatic, life-saving story. I do hope that folks don't start getting nervous around him without any reason. Their nerves could create a negative reaction that never would have happened if they hadn't been expecting him to be aggressive.

Dachshunds the most aggressive breed? What!?!? I have owned three mini Doxies and they are wonderful with my kids and every child and adult who comes to my house. My first Doxie helped me raise three orphaned kittens and accepted my first child with out a hitch even though he was older then and had been like my child before I had any. I have written an article about these wonderful dogs and it can be found at http://www.gomestic.com/Pets/Ive-Got-the-Hot-Dog-Whos-Got-the-Bun-The-Joy-of-Owning-Mini-Dachshunds.160769 . They are a wonderful breed and I couldn't ask for better dogs.

I couldnt agree more I have also voiced my opinion through the Pooch & Mutt blog.

I love the dachshund breed dearly, and will always speak highly of it.
I do hold a rather pro-dog view when it comes to stuff like this in that most times -though not all- I believe the aggressive act is a result of a human fault (inadvertent or otherwise). You rarely see the "dog's side" of the story. People should take responsibility to do their research before buying a particular breed, they should also treat their dogs with kindness and respect and perhaps that would affect some of the aggression reports we see.
I was bitten a couple times by one of my family's dachshunds when I was a young child, and it wasn't the dog's fault - it was mine because I was being a little pest. Dogs can't talk so they have only a few ways to get their points across, too bad some of the methods they have don't always translate clearly enough into "human".
Having owned 7 dachshunds that went from one end of the personality spectrum to the other, in my personal opinion, the personality/temperament of a dachshund is similar to that of a human - a combination of their inborn nature and also (mostly early) life experiences, pretty much like any breed.
Pit bulls were the big and nasty dog for awhile, as were German Shepherds and Dobermans before them, guess this time is the Dachshund's time. Bad news gets the attention, unfortunately.