Doxies Enjoy Wiener Roast on the Beach in Carmel, California 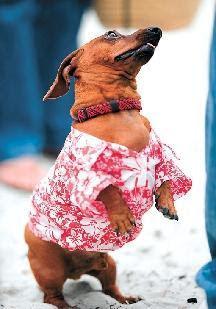 The 5th Annual Wiener Roast took place yesterday at Carmel Beach, in Carmel-by-the-Sea, California. We're betting all the dachshunds had a great time! Excerpt from the Monterey Herald: There was no velvet rope — dachshunds aren't nearly that snooty — but the canine convention that took place Sunday at Carmel Beach was pretty doggone exclusive. Frankly, if you weren't a wiener dog, it wasn't your party. That's why a dachshund named Piggles spent much of his morning securing the perimeter, running off every four-legged creature with more than 3 inches of clearance between stomach and sand.
"Piggles is perfectly content around all the other dachshunds," explained Stacey Wideman of Atascadero, founder of Central Coast Dachshund Rescue. "But if another dog comes in, she turns into our little security guard."
For the hundred-some dachshunds who brought their owners to the bash, it was quite an event, complete with the famous Oscar Mayer Wienermobile, which doled out free hot dogs to the two-legged partiers.
Read all about it, and see some nice pics in a fun article at the Monterey Herald. Woof!