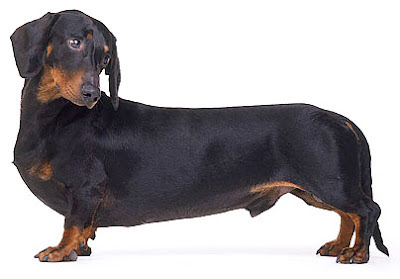 Aggressive? Us? We try to avoid negative dachshund news around these parts....large dog and coyote attacks, the sad tale of the dachshund who was euthanized this week for eating the toe of their human.....we want you to come here and leave with a smile on your face, never a frown. The goal of The Long and Short of it All is to be a place that inspires you and your dachshund to be all that you can; to read about the great things that dachshunds do, and the humans who are inspired by the love of their long dogs.
But let's be frank, it's not a great week to be a dachshund. There was a major study just released which places the dachshund at the very top of the list among 33 breeds as the most aggressive breed of dog. How can this be?
The study, by the Center for the Interaction of Animals and Society, at the University of Pennsylvania School of Veterinary Medicine, interviewed 6,000 dog owners, and can be found at Science Direct, but there is a fee to view it. If you would like to read it, email us, and we'll send you a .pdf copy.
The Discovery Channel took a look at the study earlier in the week, and while small dog bites aren't potentially as dangerous as that of larger dogs, offered some explanations on how small dogs, including the dachshund, chihuahua, and jack russell ended up at the top of the list:

"Small size very likely plays a large role in the development of fear-based aggression among some breeds," Duffy [research specialist at the University of Pennsylvania] explained. "Smaller dogs may feel more threatened by other dogs and people -- a perception that may be well founded."
"There is some evidence that smaller breeds are more often the targets of aggression by other dogs," she added, "and small breeds, particularly Dachshunds, are more prone to injury due to rough handling by children, so this form of aggression among small breeds may be a learned response due to negative past experiences."
Although certain pooches appear to be more cantankerous than others, the study supports the old adage that "there are no bad dogs," since aggression is often balanced by other more beneficial attributes, such as watchdog skills.
"Most dogs are a mixed bag of positive and less desirable traits -- just like people," says Duffy.

Read more of the review of the study at The Discovery Channel, and see some of the statistics at Discovery's blog. It all comes down to the sampling method in this sort of study we think, although the sampling method seemed valid here. But, if we interviewed 68 of our dachshund friends about their nipping habits, we feel the results would be vastly different; we don't like being included in such lists. Likewise, as far as "breed discrimination" goes, some of the pit bulls, rottweilers, and german shepherds in the neighborhood are our best friends, and are as gentle as little lambs.
This study has also hit the press, and the dachshund isn't coming across so favorably in sensationalistic articles by the Telegraph and The Daily Mail.
Read about the necessary community approach to dog bite prevention at the AVMA. 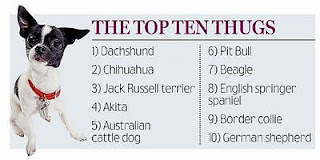 The Daily Mail's Top Ten Thugs
Posted by Rowdy and Bette at 9:04 AM

Your mailto link is not working correctly, but I would love to read the full study. Please let me know if this is possible. Frequenicity at gmail dot com.

Sorry about the broken email link, it should be fixed. We've mailed the study on to you, enjoy!

I myself have a doxie,she's not an easy-going dog with strangers... but I noticed sth: why do small-breed dog HAVE TO be patient with everybody that WANTS to touch them??? what a hell?! Big-breed dogs don't have to be so patient! They are big and strangers respect them and give them space to want or not be touched.. but the smaller ones.. don't have choice! I - as a person - don't like to be touched by strangers.. so, why my dog - just because he's a small cute one - have to like it? Do you guys understand my point of view? I hope so! Congrats for this blog! Doxies Rules!!! :-) kisses Roberta

Hi, I'd love to get a copy if possible. Thanks in advance!