Michelle C. writes: Dear Joey and Maggie, thought you might like this new video at youtube where Johnny Depp starts a wiener race on Jay Leno!
Thanks for the tip Michelle! Fun clip!
This segment aired on Jay Leno on June 27th, 2003 when Mr. Depp was promoting Pirates of the Caribbean: Curse of the Black Pearl. But this isn't Johnny's first run-in with a dachshund. Excerpt from the now defunct British magazine Neon: On 14 September 1994, a funny thing happened to Johnny Depp. At 5am, ensconced with his new girlfriend Kate Moss in the $500-a-night Mark Hotel, East 77th Street, New York, he was inadvertently dragged into a violent and destructive incident. "I'll tell you what happened," Depp says earnestly. "I was sitting on the couch in my hotel room, when a really big dachshund jumped out of the closet. I felt it was my duty to retrieve this animal, so I chased it for 20 minutes, but it wouldn't cooperate. Finally it dived out of the window. And there I was, stuck with the evidence."
The evidence in question was a couple of broken chairs, a damaged table and a mangled lamp. With no sign of the dachshund, he was charged the same morning at Manhattan Central Booking Court with 'criminal mischief'. It was the perfect rap for Johnny Depp: essentially innocuous, verging on the quaint. He walked after writing a cheque for $9,738 to pay for the damage. 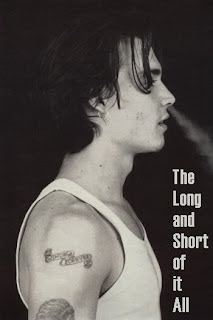 Bad Boy Johnny Depp
Posted by Rowdy and Bette at 7:34 AM