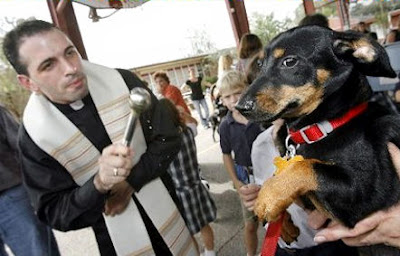 And now for a little Friday Funny?

This devout Christian couple felt it important to own an equally Christian pet.
So, they went shopping. At a kennel specializing in Christian dogs, they found a little black and tan smooth Dachshund they liked quite a lot. When they asked the dog to fetch the Bible, he did it in a flash. When they instructed him to look up Psalm 23, he complied equally fast, using his stubby paws with dexterity. They were impressed, purchased the animal, and went home, piously.
That night they had friends over. They were so proud of their new Dachshund and his skills, they called the dog and showed off a little. The friends were impressed, and asked whether the dog was able to do any of the usual dog tricks, as well.
This stopped the couple cold, as they hadn't thought about "normal" tricks.
Well, they said, "let's try this out." Once more they called the long dog, and they clearly pronounced the command, "Heel!"
Quick as a wink, the dog jumped up on the guest's lap, put his short paw on the man's forehead, closed his eyes in concentration, and bowed his head and began to pray.
Posted by Rowdy and Bette at 8:23 AM