Dachshund Stories in History: BAN IS PLACED ON THIS CLEVER HOUND 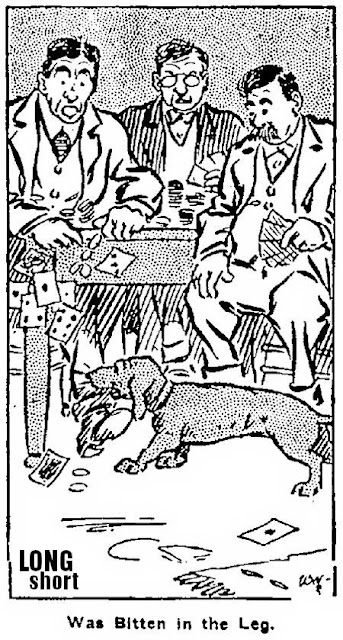 While conducting Dachshund research at a local university, we stumbled upon this fun old article, from The Chicago Defender, April 19, 1913:

Daschund (sic) Taught to Watch the Players During the Progress of Card Games.

Winsted, Conn - Friends of Eugene McCaskey have placed the "no admittance" bar on his daschund whenever he goes to their homes for an evening at cards, because the canine has been taught to watch the floor and seats about a table while a game is in progress.  Not only will he pick up a coin or card which finds its way to the floor and carry it to his master, but the daschund watches players who are in the habit of concealing a card between their legs or on a seat beneath their legs for future playing.
One of Mr. McCaskey's friends was bitten in the leg after concealing a card, hence the edict.  The dog has other sporting activities.  When his master goes fishing along the shore of a lake, he will grab up the pole when the bob disappears in the water and run along with it until the fish is on land.
Posted by Rowdy and Bette at 9:15 AM