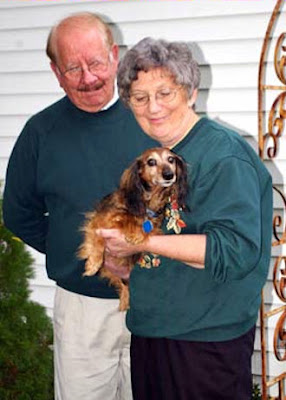 In one of those odd little stories that makes you think twice about the intelligence of our furry companions, meet red longhair 'Pepper,' and her humans Jerry and Audrey Prokuski, who hail from Mendota, Illinois.  Pepper was attacked in her own backyard by a neighboring pitbull, and after her human mom pulled the offending dog off and took him to a neighbors, little Pepper was nowhere to be found.
Turns out Pepper had headed for the nearby human Emergency Room, even though she had never walked near there before.  The ER staff did their best to fix Pepper up, checked her tags, and called the city clerk's office who then contacted the owners.  Both Pepper and Mrs. Prokuski are recovering from the incident.  Read all about it at the News Tribune.
Posted by Rowdy and Bette at 9:04 AM

Our beautiful little long hair, Heidi Hoagi, was also attacked by a pit bull 4 years ago this week. I was standing just a foot away from her, so they don't have to be unattended to be attacked! She was in very bad shape - but we are blessed that she is still with us at 15 1/2. We are very happy your little Pepper is still alive and well too. GOD Bless.
Rick and Sandi from Maryland