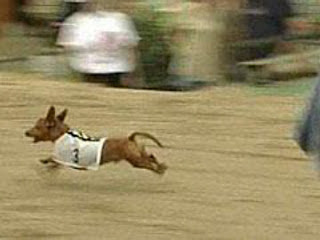 More than 11,000 dachshund fans turned up to cheer on the doxies Sunday in Kansas City for the 14th Annual Wiener Dog Nationals. Corky, this year's winner, was the oldest dog in the race. Way to go Corky! Excerpt from The Kansas City Kansan: Corky, a former champion owned by Chelbie and Marty Glenn of Lawrence, went box-to-wire for a second title this year. The oldest dachshund in the race at 10 years of age, Corky covered the 110-yard sprint in a fast 12:16 seconds on a track made a bit slow by rain that fell later in the afternoon. Read the rest.
Image source.
Posted by Rowdy and Bette at 7:59 AM