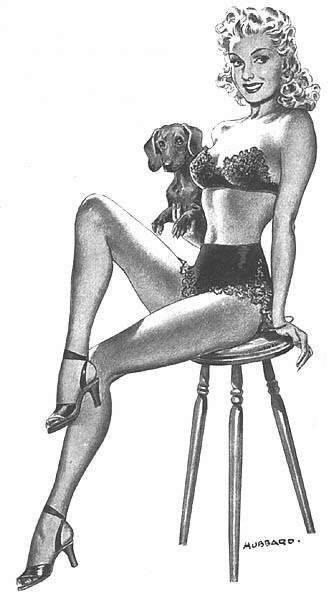 Meet 'Fritz' the dachshund and 'Jane!' 'Jane' was a wildly popular racy cartoon series in wartime Britain which Churchill dubbed 'Britain's Secret Weapon,' as Fritz and mostly Jane kept up the troops morale with their daily misadventures.
Excerpt from The Independent: Of all the Second World War forces' sweethearts, few were less likely than the risquee cartoon pin-up Jane, who had a knack for losing some of her clothes wherever she went. "Jane's Journal - or The Diary of a Bright Young Thing" opened modestly enough on 5 December 1932 in the Daily Mirror. It was the creation of Norman Pett, a freelance cartoonist for the likes of Punch and assorted children's comics, and was inspired by a telegram received by his wife, Mary - "EXPECT COUNT FRITZ VON PUMPERNICKEL JUST OVER FROM GERMANY CANNOT SPEAK WORD OF ENGLISH YOU'LL LOVE HIM." Fritz was a dachshund, who became Mary's - and Jane's - bosom companion. Pett drew from life and initially his wife posed for him. However, as Jane began to reveal ever-increasing amounts of flesh, the artist began to look for a new model. He found her at a Birmingham art college, posing for a life class: Christabel Drewry, a blonde former beauty queen and artist's model who became the very public personification of the character.
Read more about the Jane cartoon series. 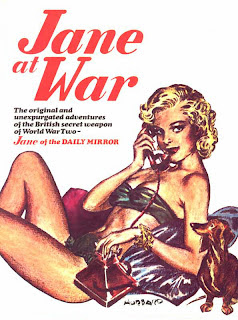 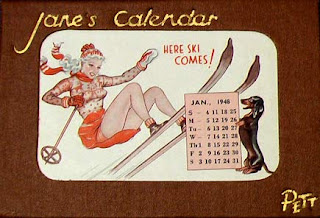 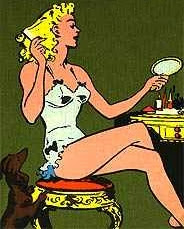