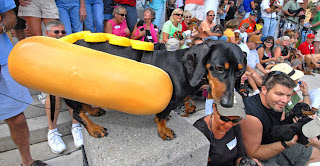 (Click photo to enlarge)
July is National Hot Dog Month, and today is National Hot Dog Day according to the National Hot Dog & Sausage Council. It's the closest thing we've got to a National Dachshund Day, so get the doxies out and celebrate!
According to legend, the term “hot dog” was coined in 1901 when sports cartoonist Tad Dorgan was at a baseball game at the Polo Grounds in New York. Vendors began selling hot dachshund sausages in rolls and Dorgan could hear vendors yelling, “Get your dachshund sausages while they’re red hot!” He sketched a cartoon depicting the scene but wasn’t sure how to spell dachshund, so he called them “hot dogs,” and the rest, as they say, is history. Image source. 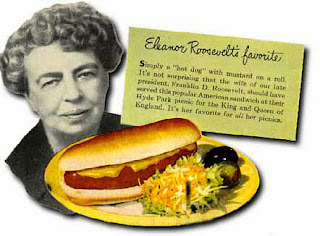