A Dachshund Rescue of a Different Sort in the News 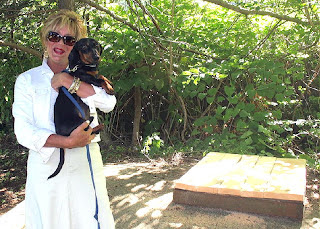 Great to hear that 'Brody' is OK! Excerpt from Westport Now: Hours of anxiety over a missing Dachshund ended happily early today after Westport firefighters rescued the animal from an abandoned well where it had been trapped overnight.
The dog’s owner, Pam Nistico, said she had walked 1-year-old Brody late Saturday night and then returned to her home on the grounds of her family’s Red Barn Restaurant, 292 Wilton Road. When she put him down, Brody playfully chased after the family cat.
After a while, Nistico became concerned when she could not find Brody. She and her daughter, Desiree, 19, and a friend searched frantically on nearby streets.
They called Westport police for help and even spotted a state trooper on the nearby Merritt Parkway where he had stopped a speeder and asked if he had seen the dog. The trooper used his flashlight to look into the woods off the parkway. but Brody was nowhere to be found. Frustrated, they gave up the search at about 2:30 a.m.
Then at about 5:30 a.m., Nistico went outside again. “I whistled as I do to attract Brody and the cat,” she said. “I then heard a weak whimper.” It was coming from an abandoned well on the property.
She called police who summoned the fire department. Firefighters determined that Brody had fallen through the deteriorated plywood covering the 4-foot-deep well and had landed on the bottom, said Assistant Chief Gene Maloney.
After using meters to determine that the atmosphere in the confined space was safe for entry, Firefighter Mike Scalzo donned breathing apparatus and climbed down a ladder placed in the hole.
“He offered the dog cookies, wrapped the dog in a blanket and carried the dog out,” Maloney said.
Brody was uninjured but jittery, rescuers said. At one point, Brody “attempted to bite the hand that fed him,” Maloney said, but Scalzo’s protective gloves prevented serious injury.
Nistico said she was deeply grateful to police and firefighters who helped her find and bring Brody back to her. “They were all wonderful—just great,” she said.
Nistico, who had recently put an 18-year-old Dachshund named Bubba to sleep, said she adopted Brody after spotting him the Internet. The dog, then 7 months old, had been abused and was looking for a home.
Posted by Rowdy and Bette at 11:27 AM