Dachshund Owners Chaining Themselves in the News 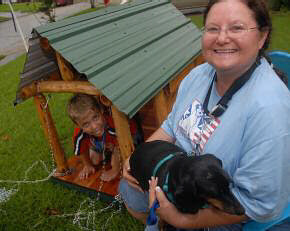 Excerpt from the Houston Chronicle: Penny Hann and grandson Chase, 6, sit in Hann's Pasadena front yard, chained by the neck to a doghouse Monday. Joined by Mitzi, her dachshund, Hann sat at least part of the day in the rain.
Despite the steady rain that fell on Pasadena, Penny Hann sat in her front yard Monday and did what she had promised: chained herself to a doghouse.
"I said I would be out here in rain or shine," she said. "So here I am."
Although she was under a blue canopy, water leaked onto Hann, one of the 104 people in 34 states who planned to chain themselves to doghouses in protest of the practice of keeping dogs on chains.
"It's very inhumane to put a dog on a chain," she said. "They're pack animals and they don't understand why they can't be with the rest of the pack." Read the rest.
Posted by Rowdy and Bette at 7:31 AM