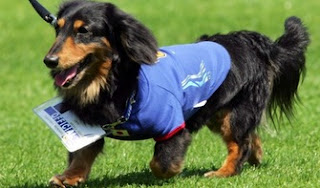 Rommel will be sorely missed! From Reuters: TOKYO, July 5 (Reuters) - Japan are bidding for a third straight Asian Cup title robbed of their secret weapon now that team mascot Rommel has retired from active duty.
Miniature dachshund Rommel, or Ron for short, was once Japan's lucky charm, his talismanic presence said to be behind the team's 18-game unbeaten run before the 2006 World Cup.
But after Japan's meek exit from the tournament Rommel was stood down by his owner, Japan Football Association's chief media officer Hideto Teshima.
"That unbeaten streak was always going to end in Germany," Teshima told Reuters in an interview.
"You can't really blame Ron. Japan weren't going to win the World Cup. The time was right for him to walk away. He's about 13 now, which in human years is 91. He's getting on."
Ron, dutifully decked out in his trademark kids-size Japan shirt and with his own official accreditation hanging around his neck, enjoyed four years of red-carpet treatment. Read the rest.
Posted by Rowdy and Bette at 1:27 PM